Congratulations to our employees who received an award at the British Engines Group Annual Awards Night 2022.

The awards night acknowledges the group’s long serving employees who have been a part of British Engines for 25 years, as well as apprentices in their first, third and fourth years.

Barry Scott and Ian McGeorge were both awarded for 25 years’ of employment. Barry started with the British Engines Group in 1997 as a mature apprentice. Barry is now working as an Assembly and Test Fitter. 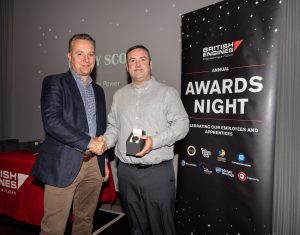 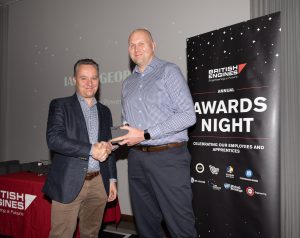 Barry is known across the business as a dedicated and hardworking valued member of the team who is always keen to share his knowledge and experience of assembling and testing motors with his colleagues, as well as the apprentices who he regularly mentors.

Ian started his career in September 1997 as an apprentice and was a recipient of the HT Lamb Award. Since then, Ian has worked in various roles and is currently a Manufacturing Manager at Rotary Power.

Ian is described by his colleagues as dependable and reliable and his drive and enthusiasm have helped steer Rotary Power’s journey through milestones and successes. Thank you to Barry and Ian for your years of long service!

All British Engines Group apprentices were commended for their outstanding levels of commitment and versatility as they progress through their apprenticeships.

Are you interested in a career at the British Engines Group? Take a look at the jobs we have available across the North East.